Welcome to Picotown, a city like any other until big blocks started to pop out of the earth right into the middle of the city! The picopeople need you: Pico Driller!

Falling blocks that could squish you anytime? Small capsules of air underground? Ever-present danger? Prepare to drill your way and save the day!

Found out about this game on the lexaloffle website as one fo the front page games. I LOVE This Game!

Susumu is red and green rather than pink and blue for some reason.

It's pretty hard to avoid falling pieces when they come from off-screen.

It's basically Mr. Driller except on the Pico-8 :D

Reply
the coolest dude229 days ago

veeeeery good and amazing game!! the creators and this game i give my medals of coolness and amazingness  because im the coolest dude ;)

loved the ps1 game, and this is a amazing demake!

This is a very cool concept and greatly executed! The little percentage bar thingy is a nice way to stop people from just drilling straight down and adding to the experience at the same time. Great game!

As a driller fan, this is great, very good job!

Simple is not always bad! Really nice and addicting gameplay

I was a bit iffy at first, but it's oddly addicting. I also love the art style and the colors - very bright and very vibrant

Johan, i really like all your games, i am learning basics as a beginner on pico 8 and i appreciate the love you injected into them all. thanks :-)

Love the feel of this game! really takes me back in time to my old nintendo 8bit that i loved so much as a kid! so very well done on the nostalgia part! its a fun time killing game for sure! very well made guys! But the menu, what is up with the menu! i had no idea where to go or what to do it was very confusing :P i was reseting the card over and over again but i had to press x/z to enter the menu. just saw the comment “X/Z to drill in current direction” on the page otherwise i would have never know! But other than that love it :D if you have time i woud love to hear what you think about the game https://guldor.itch.io/citybuilder i’m working on, i’m dying to get a ton of feedback to improve myself and would love to hear what you think!

Game is buggy. Sometimes I can get inside a block (my character is on a block). If I press joystick one way and press button I can smash the block, however if I do joystick in another direction with button my character disappears.. turns out he was off screen to the right! I could see him just a little bit, but there's no way to get back on the screen. Just have to wait until air disappears or reset.

Other than that it's good and runs just fine. No lag issues on my home computer, or my S20 Ultra phone.

Another bug.. if you get multiple air capsules too quickly it only counts one of them.

Another bug.. I only got this once. The game would not let me climb up for that whole game.

This is an amazing game! The only problem, and this may also have something to do with my internet but it only happens on this game so I think it's at least multifactorial, is that sometimes after I've been playing for a while the game will get so slow it doesn't really function. The bar for air and the one displaying your score both disappear, and the lag is so intense I can't tell what I'm doing. It seems the only way to fix this is to either reload the whole page or pause and "reset cart," neither of which I like to do because they take away my high score. This last time, I was already past my high score at 2000 something feet (but I have no idea where besides that it was between 2000 and 2500, because the meter was gone), and I tried to wait for it to work but I eventually had to end the game with 2 lives left. It was really disappointing because I think I was gonna go really far that time.

The reason for that was found and noted on the BBS thread! https://www.lexaloffle.com/bbs/?pid=77637#p

ah okay... there was also a possible fix given though...

Ah, Mr. Driller.  I couldn't count the hours I spent in my youth playing the PS1 and DS versions.

This port is a faithful adaptation of the arcade-style gameplay, and looks charming to boot.  The pixel animations are fluid and familiar-- Susumu's hair flys upwards as he falls!

I'd happily play this again.

My critique/suggestions for the game are as follows:

- Completely drilling an X block does not notify you of a 20% air loss.  This is noted in the how to play section, but most versions of the game display an indicator.

- When Susumu dies, any surrounding air capsules are destroyed!  Typically air capsules remain, allowing you to drill around them and carry them below (for when you need them).

- If you intend to expand on the game, look into some of the different block patterns/behaviors and songs (if this is in the game and I did not get far enough down, disregard).  One of my favorite parts of playing the PS1 Mr. Driller is digging far enough to get to the two-colored section and going into free fall.

Thanks for the Pico 8 port!  It shows a lot of love and care.

Great game! It's amazing what can be done with PICO-8!

Sweet game! Ping me if you are interested in publishing it to other game portals.

I played mr driller on my DS, so I was very happy to have found this.

You have a great idea!

Great Game. Just found it and found myself wanting to play more!

Matthewmatosis, a well-respected game analyst, made a video on this game. The things he talked about really blew my mind.

Wow, the lag is real! That shouldnt be how you'd experience the game, sorry about that.

Reply
Master of sj1 year ago

The game was good.

wish you guys make another arcade/namco game in this style

An offline version would be great, I would also like to pay a price to support the further development.

Hello dear team, I think the game is very successful and nicely designed. It would be cool if you could still offer an offline variant.

As a huge Mr. Driller fan, who has cleared the arcade game several times without dying, I really want to like this, it's a cute tribute and art style, and a lot of the gameplay is very faithful to the original. I'm not familiar with all the limitations of Pico 8, but about 3 major things here keep me from fully enjoying this and end up frustrating me.

Mr Driller isn't as nimble, half the time when I want to jump up a block he just refuses to do it, and of those half times I end up getting squashed. It forces me to play way more reservedly which doesn't bode well with the timer, and how painfully slow the air capsules want to fall down. Sometimes he doesn't want to drill to the left or right; maybe I'm not close enough, but it feels like it should have a more forgiving range because again, any error tends to cause me to die when I know exactly what I want to do but it seems to ignore my input.

I know there's only so much screen space, and the scrolling works fine when going down, but if my vertical descent stops it really ought to scroll UP... not down. A lot of times I'll be trying to make my way towards an air capsule and be crushed by a forgotten colored block that I couldn't react to because I have all of two blocks of vision above me.

Third, the game seems to bug out randomly, and worse yet, when I'm really close to the end. What happens is it looks like the background disappears, and the game crawls to like 2 FPS or something, becoming virtually unplayable.

The closest I can get is 4830ft, and I played as much trying to get to 5000 feet. I wish these issues were kinda ironed out cause there's a lot of potential here, but it's not quite hitting the same fairness as the original.

Your feedbacks are really interesting, and I do agree with it (climbing on a block... ugh, I know!)! This was a fun homemade project so I'm not sure if we're going to revisit it at some point. We did what we could in the time frame we got and within the Pico-8 limitations. Sorry for the frustration!

I think I only got as frustrated cause I was really trying to reach the end; I eventually did it though! I hope your future projects go well.

This was pretty good! 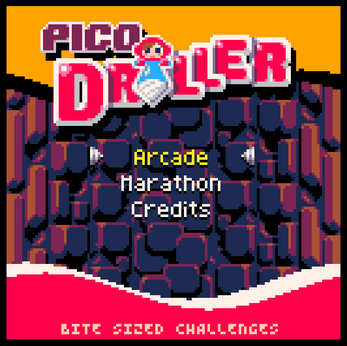 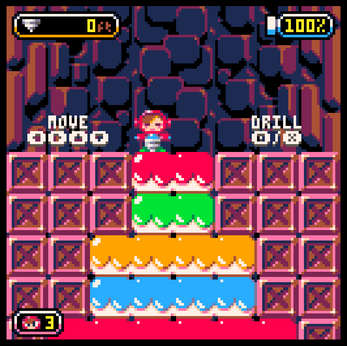 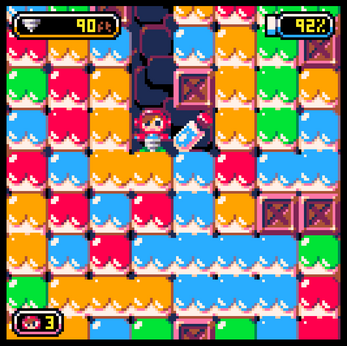